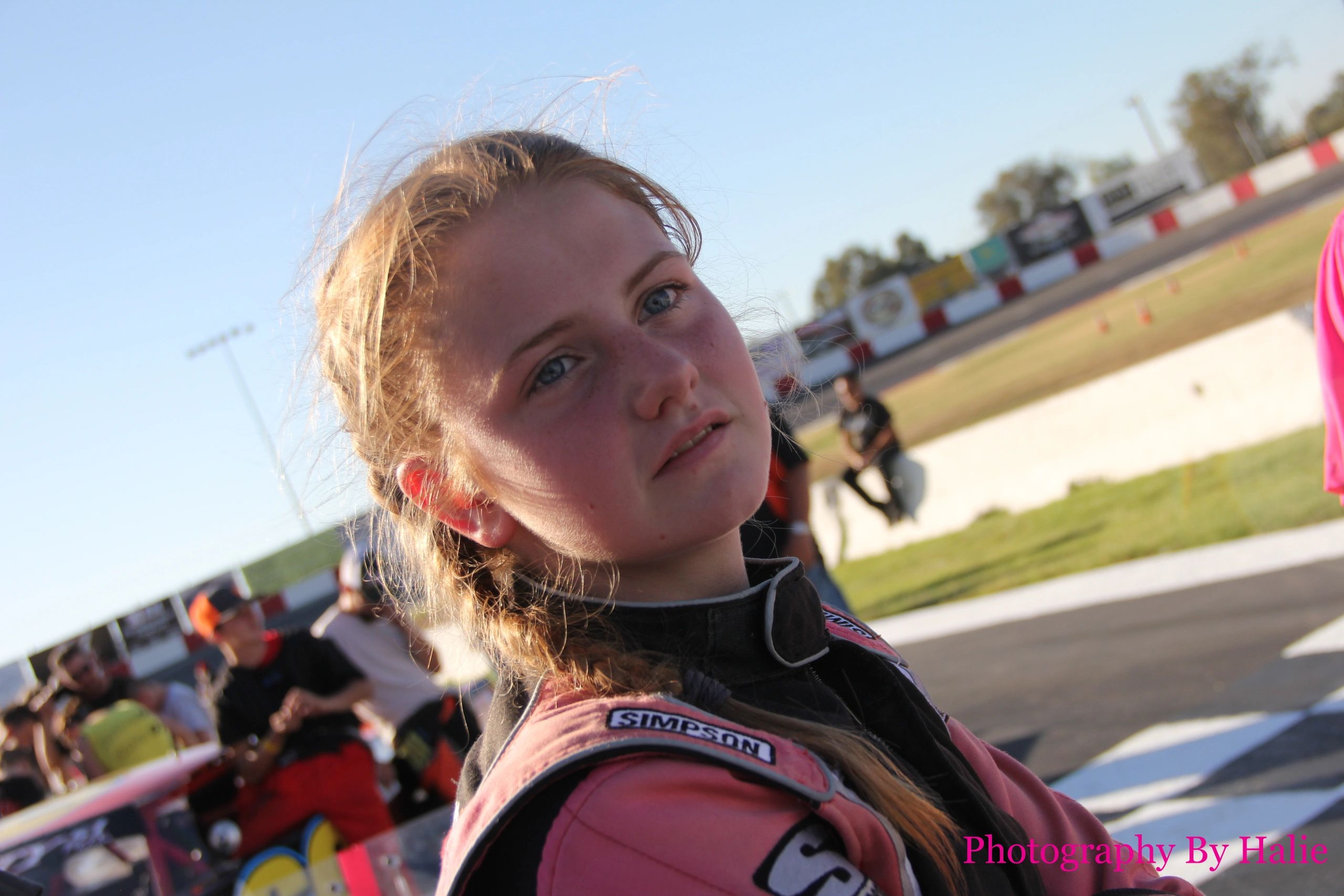 Kercie is a brand ambassador for Wiley X Sunglasses for 2020

Kercie Jung Racing's test session in Madera on February 8th - read all about it!

Kercie Jung is fourteen years old, has been racing since she was seven years old, and is currently in the ninth grade. In 2020 Kercie will be competing in the Junior Late Model Division at Madera Speedway.

In 2016 Kercie stepped up to the Bandolero Division, racing at tracks around California which included Irwindale, The Orange Show Speedway, The Speedway at Willow Springs, Kern County Raceway Park and Madera.

In 2019, Kercie competed in the 51Fifty Jr. Late Model series at Madera Speedway. This is a nine race series that showcases the talents of drivers between the ages of 10 to 16, from all over the west coast. The typical car count was 18 to 21 cars.

Kercie qualified an average of 11th, with an average finish position of 9th. She finished the season 7th in points (out of 21 competitors). On track Kercie was extremely consistent, having one 6th place finish, three 9th place finishes, four 8th place finishes, and one DNF. She was also the highest finishing female driver, out of three women drivers in the field.

Kercie also was one of twelve drivers chosen, out of over 300 applicants, to compete in a two day Jr. Late Model Challenge Camp, the first ever for Madera Speedway. She finished 5th out of the 12, and the camp will be televised on MAVTV in early 2020.

Kercie will return in 2020 with goals of winning races and the championship.

In 2018 Kercie was the California State Champion in the INEX Bandolero Outlaw Division. She placed 13th in the Nation.

Competed in the 9 race series with an average qualifying effort of 11th, and an average finishing position of 9th. She finished 7th in the points, out of 21 competitors, and was the highest finishing woman driver out of the three women drivers in the field.

Kercie campaigns the bright Pink paint scheme on all of her cars and racing related materials in honor of her aunt, who passed away from Breast Cancer ten years ago. This has become one of her trademarks, along with her number “17” which adorns all her cars.

In addition to Breast Cancer awareness, Kercie is also involved in local community events and worthy causes. Recently a friend of hers passed away due to issues with his heart. He needed a transplant and Kercie was a supporter and spokesperson, helping to raise awareness and funds for her friend, Brayden Eidenshink (“Brayden’s Brave Heart”). In honor of Brayden, he will always have a mention on her car.

Kercie understands the importance of women having the same respect in racing as men, even though she has never experienced any negative actions from her competitors over her gender. She wants to continue to be a voice and an example to the public and her fans that gender plays no part in racing. Women are just as capable and successful in racing, and life, as long as you work hard and are dedicated to doing your best.

Kercie’s ultimate goal is to drive professionally at the NASCAR Cup Level. In order to reach that milestone, Kercie will be working in different areas of her career over the next four years.

Kercie will be applying to Driver Development programs to help her develop her driving skills and get much needed experience. She applied for the Kulwicki Driver Development Program in December 2019. and should know in early 2020 if she was a successful applicant. Other programs that are being considered include the Lynn St. James’s Winner Circle Foundation Grant.

Kercie Jung Racing will be looking for marketing partners to be involved, either on a race-by-race basis, a yearly basis, or that want to join us on more than just a one year adventure. We hope to secure sponsors that want to commit to multiple years that will benefit them as well as Kercie Jung Racing over the next few years.

Kercie’s Late Model is a Racecar Factory chassis that won a lot of races  at Kern County Raceway Park and Madera, with driver Buddy Shepherd.

The car weighs 2900 lbs, is powered by a GM 602 crate motor that puts out 355 HP, and will be restricted to run in the Junior Late Model Series. The body is fiberglass, and the frame is a tubular chassis design.

This car was purchased by Kercie Jung Racing in 2019, and will be the primary car for the season. Kercie also has a backup car that she ran last year.

Kercie will compete in the 51 Fifty Junior Late Model Division at the 1/3 mile Madera Speedway, located in Madera, California, right off Highway 99. It is two hours north of Bakersfield, and only 23 miles north of Fresno.

Kercie is planning on competing in nine nationally televised races on MAVTV, if she has the funding to do so.

This is a nine race SERIES in 2019 and it is televised on MAVTV! "The concept for the Jr. Late Model Series is something I've thought about since 2006, as I believe a restricted late model is a great place for a youngster to hone their skills in a car they can move up with throughout their teenage years. We are proud that we have built a series where talent can shine in the RPM Pro Late Model Series, and we intend to do the same for the 10-16 year old crowd with the Jr. Late Model Series on MAVTV" Kenny Shepherd.

All nine races of the Series will be broadcast nationwide!

Owned and operated by Lucas Oil Products, MAVTV is a television network with its roots deep in the automotive world. MAVTV offers an unparalleled line-up of exclusive motorsports, that includes prestigious events such as the Chili Bowl, The AMA Pro Motocross series, the Lucas Oil Challenge Cup and more.

Kercie Celebrating after winning her 6th Track Championship at KCRP

We would love to hear from you!